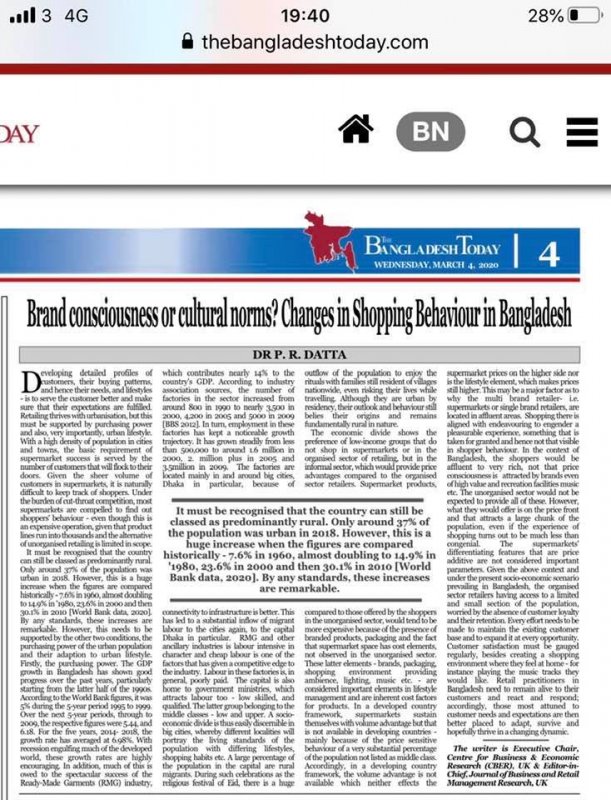 Developing detailed profiles of customers, their buying patterns, and hence their needs, and lifestyles – is to serve the customer better and make sure that their expectations are fulfilled. Retailing thrives with urbanisation, but this must be supported by purchasing power and also, very importantly, urban lifestyle. With a high density of population in cities and towns, the basic requirement of supermarket success is served by the number of customers that will flock to their doors. Given the sheer volume of customers in supermarkets, it is naturally difficult to keep track of shoppers. Under the burden of cut-throat competition, most supermarkets are compelled to find out shoppers’ behaviour – even though this is an expensive operation, given that product lines run into thousands and the alternative of unorganised retailing is limited in scope.

It must be recognised that the country can still be classed as predominantly rural. Only around 37% of the population was urban in 2018. However, this is a huge increase when the figures are compared historically – 7.6% in 1960, almost doubling to 14.9% in ’1980, 23.6% in 2000 and then 30.1% in 2010 [World Bank data, 2020]. By any standards, these increases are remarkable. However, this needs to be supported by the other two conditions, the purchasing power of the urban population and their adaption to urban lifestyle. Firstly, the purchasing power. The GDP growth in Bangladesh has shown good progress over the past years, particularly starting from the latter half of the 1990s. According to the World Bank figures, it was 5% during the 5-year period 1995 to 1999. Over the next 5-year periods, through to 2009, the respective figures were 5.44, and 6.18. For the five years, 2014- 2018, the growth rate has averaged at 6.98%. With recession engulfing much of the developed world, these growth rates are highly encouraging. In addition, much of this is owed to the spectacular success of the Ready-Made Garments (RMG) industry, which contributes nearly 14% to the country’s GDP. According to industry association sources, the number of factories in the sector increased from around 800 in 1990 to nearly 3,500 in 2000, 4,200 in 2005 and 5000 in 2009 [BBS 2012]. In turn, employment in these factories has kept a noticeable growth trajectory. It has grown steadily from less than 500,000 to around 1.6 million in 2000, 2. million plus in 2005 and 3.5million in 2009.  The factories are located mainly in and around big cities, Dhaka in particular, because of connectivity to infrastructure is better. This has led to a substantial inflow of migrant labour to the cities again, to the capital Dhaka in particular.  RMG and other ancillary industries is labour intensive in character and cheap labour is one of the factors that has given a competitive edge to the industry.  Labour in these factories is, in general, poorly paid.  The capital is also home to government ministries, which attracts labour too – low skilled, and qualified. The latter group belonging to the middle classes - low and upper. A socio-economic divide is thus easily discernible in big cities, whereby different localities will portray the living standards of the population with differing lifestyles, shopping habits etc. A large percentage of the population in the capital are rural migrants. During such celebrations as the religious festival of Eid, there is a huge outflow of the population to enjoy the rituals with families still resident of villages nationwide, even risking their lives while travelling. Although they are urban by residency, their outlook and behaviour still belies their origins and remains fundamentally rural in nature.

The economic divide shows the preference of low-income groups that do not shop in supermarkets or in the organised sector of retailing, but in the informal sector, which would provide price advantages compared to the organised sector retailers. Supermarket products, compared to those offered by the shoppers in the unorganised sector, would tend to be more expensive because of the presence of branded products, packaging and the fact that supermarket space has cost elements, not observed in the unorganised sector. These latter elements – brands, packaging, shopping environment providing ambience, lighting, music etc. - are considered important elements in lifestyle management and are inherent cost factors for products. In a developed country framework, supermarkets sustain themselves with volume advantage but that is not available in developing countries – mainly because of the price sensitive behaviour of a very substantial percentage of the population not listed as middle class. Accordingly, in a developing country framework, the volume advantage is not available which neither effects the supermarket prices on the higher side nor is the lifestyle element, which makes prices still higher. This may be a major factor as to why the multi brand retailer- i.e. supermarkets or single brand retailers, are located in affluent areas.  Shopping there is aligned with endeavouring to engender a pleasurable experience, something that is taken for granted and hence not that visible in shopper behaviour. In the context of Bangladesh, the shoppers would be affluent to very rich, not that price consciousness is   attracted by brands even of high value and recreation facilities music etc. The unorganised sector would not be expected to provide all of these. However, what they would offer is on the price front and that attracts a large chunk of the population, even if the experience of shopping turns out to be much less than congenial. The supermarkets’ differentiating features that are price additive are not considered important parameters.

Most of the South Asian countries such as Bangladesh have long been regarded as traditional collectivistic nations, in which attainment of in-group goals are the main priority, more than individual goals and people are more focused on conformity, group harmony, safety & security, traditional values and beliefs. Hence, this cultural orientation plays a significant role in influencing consumer shopping behaviour in purchasing intentions. People are more likely to evaluate brands that are consistent with their cultural values. Due to traditional cultural norms, Bangladeshi consumers depend on word of mouth (WOM) communication and recommendation from relatives and peers about product related information such as a source of credibility more than advertising and marketing efforts by the organisation. In such societies in-group reference is vital.  However, over recent years, due to the effect of globalisation, continuous economic growth, increased employment and affluence, this in-group culture is becoming weaker day by day and various evidence indicates that people are pursuing both individualistic value orientation such as autonomy, individual interest and pleasure, self-centred achievement as well as traditional collectivistic values such as group interest, harmony and loyalty. Nevertheless, over time, space and circumstances individual self-identity has had a consistent influence on individual purchase behaviour.

Given the above context and under the present socio-economic scenario prevailing in Bangladesh, the organised sector retailers having access to a limited and small section of the population, worried by the absence of customer loyalty and their retention. Every effort needs to be made to maintain the existing customer base and to expand it at every opportunity.  Customer satisfaction must be gauged regularly, besides creating a shopping environment where they feel at home – for instance playing the music tracks they would like. Retail practitioners in Bangladesh need to remain alive to their customers and react and respond; accordingly, those most attuned to customer needs and expectations are then better placed to adapt, survive and hopefully thrive in a changing dynamic.